The most relevant of the Ordinary General Assembly of the ADEPM. 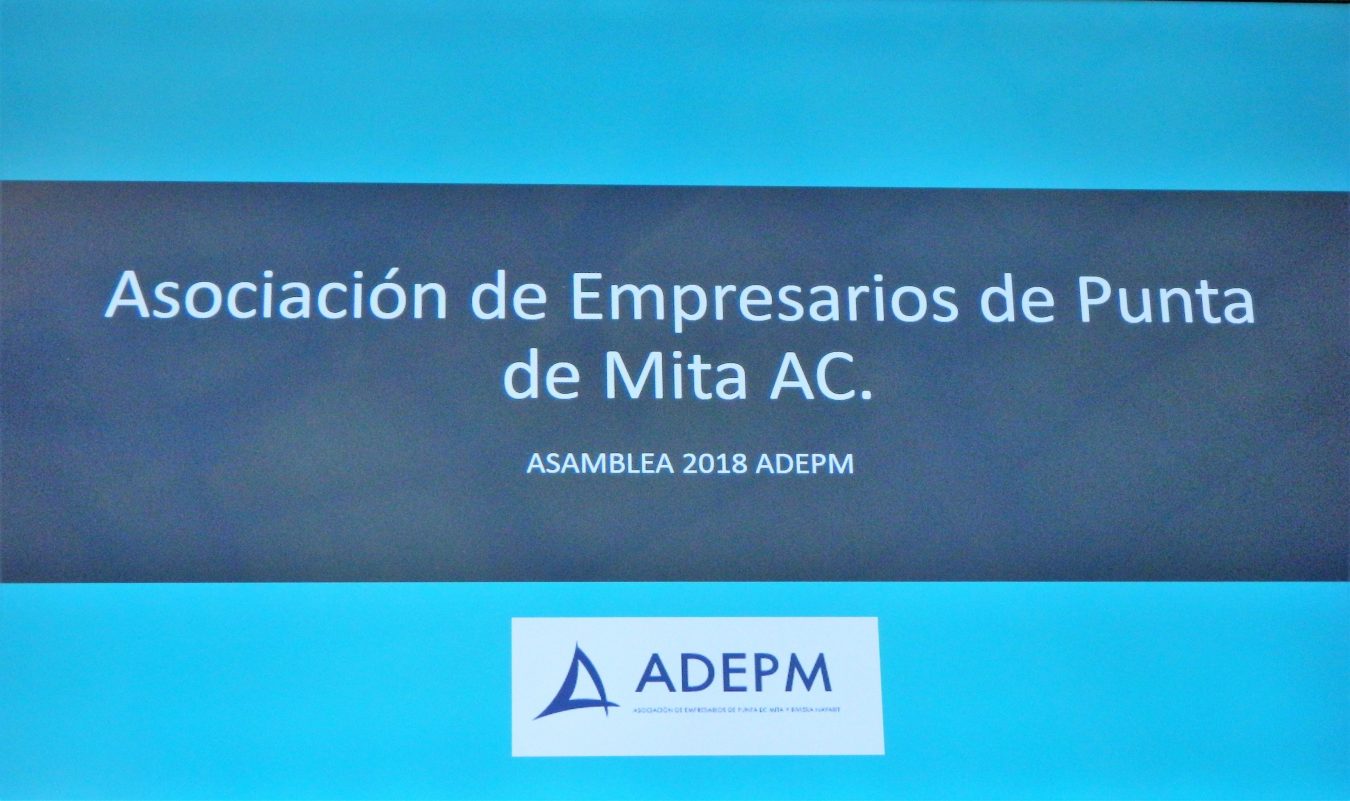 Ordinary General Assembly of the ADEPM. We thank the members for their valuable support to the important work we are doing.

The Assembly was declared legally installed upon presentation of the legal quorum for its execution, with a participation of 64.5% of ADEPM members.

To start, Jason Lavender, President of the ADEPM took the floor and presented a report with the results obtained in 2017, among which the following points highlight:

Jason Lavender commented that several meetings have been held with the Naval Zone Admiral in Nayarit and efforts are being made together with the Secretariat of the Navy in Mexico to obtain a donation of the land for its construction. He added that this project is also of interest to Enrique de la Madrid Secretary of Federal Tourism.

This is a project carried out with SECTUR, the idea being to conclude its approval in May. This project complements to a large extent the initiative of SECTUR to decree the Punta de Mita area as the FIRST SUSTAINABLE DESTINY OF MEXICO in accordance with the 17 Sustainable Development Goals of the UN Habitat.

The ADEPM together with the Municipal, State, Federal and PRO SAYULITA GROUP have worked hand in hand to find definitive solutions to the problem of water sanitation and contamination. Clean water for Sayulita is a project that has been working hard.

The ADEPM, the DINE Group, and the Punta Mita Foundation, came together to rehabilitate the Police Station after suffering 9 years of abandonment. Punta de Mita will finally have a patrol car, with a four-wheel drive and security officers 24 hours a day. The reopening and operation of the station is estimated to be ready by the end of February.

The Committee on Mobility and Garbage Collection was created. An alliance was made with the Association of Restaurant Owners, the Shared Land (Ejido) of Higuera Blanca and, Punta de Mita, and the Municipal Government, due to the problems that the region is presenting derived from this situation.

On the other hand, he also presented the approved 2018 work agenda.

The acquisition of the property already analyzed and selected for the construction of the Naval Station in Punta de Mita will be followed up. In addition, it will seek to create a trust with the purpose of obtaining public and private resources that allow this construction. It will also seek to create an alliance with the municipality of Compostela in order to raise more financial resources.

The ADEPM will continue to work and manage actions and initiatives necessary to achieve a sustainable area development, and will analyze the possible and necessary strategies to make PUNTA de MITA become the FIRST SUSTAINABLE DESTINY in Mexico.

We will remain insistent in the face of the serious contamination problem that Sayulita has as a consequence of the deficient water treatment. This will go beyond just fixing the problem immediately, since we will also seek to verify in the future that the project works under the rules that be stipulated.

The ADEPM will coordinate the rehabilitation process, until this station is delivered and operated as agreed.

The ADEPM will be supervising the change of the parking sites on Las Redes Ave. And will also ensure a parking for tourists and the workers of the area El Anclote. We will also analyze strategies to define the construction of a plaza-kiosk within the town of Punta de Mita.

ADEPM presented the financial reports corresponding to fiscal years 2016 and 2017. Treasurer Ken Dahl explained and was approved by the assembly, the following payment scheme for 2018:

There will be a restructuring in the value of the 2018 annuity; the members agreed that the financially larger partners will pay a double fee. On the other hand, the investment partners of the zone will continue paying the same fee of their 2017 quota and the resident members without investment in the region will have a reduction of 50%.

Finally, we proceeded to the election, discussion and approval of the ADEPM’s board of directors for the fiscal year 2018.

With this, the ADEPM 2018 Ordinary General Assembly ended.

If you are a member and would like to receive the full minutes of the meeting or more information on a particular issue, please contact us at info@adepm.org.mx to assist you.